We Specialize in Snatching Mobile Handsets in Lagos Traffic Jams’ 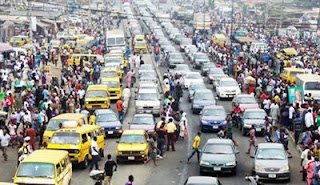 Luck ran out for a 20-year-old a prospective candidate of Joint Admissions and Matriculation Board (JAMB), who is currently a guest of the operatives attached to the Special Anti-Robbery Squad ( SARS ) of the Lagos State Police Command headquarters, Ikeja.
Mbanefo Ekene was arrested, following a gunshot wound he sustained on Friday, October 23, 2015, during a raid on residents of Agric Area of Ojo, Lagos/Badagry expressway, an outskirt of Lagos.


SATURDAY Crimewatch reliably gathered from a police source at the SARS that during raids on the residents of the affected community in Ojo, Ekene was unlucky as he was shot in his waist by members of a police patrol team who raced to the crime scene, following a distress call, while three other members of the four - man gang narrowly escaped.
A locally made pistol abandoned by the fleeing members of the gang was recovered from the scene.
It was learnt that though the 20-year-old suspect made spirited attempt to escape from the scene, along with his members, but as a result of the gunshot wound he sustained, he was arrested at a corner of a house by vigilant members of the community where he was writhing in pains.
It was further gathered that following his arrest, he was handed over to the police at Ojo Division before his subsequent transfer to the operatives of Special Anti-Robbery Squad (SARS ) of the Lagos State Police Command on the directives of the CP, Mr. Fatai Owoseni.
According to Ekene, he took to mobile phone snatching shortly after he lost his job as a petrol attendant attached to MRS Filling Station, Festac town, Lagos.  “My father is late, but I stay with my mother at Iyana Isasi. It was last year December that I lost my job as a petrol attendant at MRS Filling Station, Festac town. My initial plan was to obtain JAMB form and further my education in any of the Nigerian universities and that spurred me to work at the Filling Station. It was when I couldn’t lay my hands on any legitimate job, I took to snatching handsets. My mother wasn’t aware that I had joined the bad boys’ group.
“I started out first as a lone operator. I would go to Iyana Iba when it was 8:00pm every day and I preyed on ladies making calls at any point in time, regardless of their inconveniences. Soon afterwards, I graduated to staying by roadsides, especially when there were traffic gridlocks to snatch handsets from motorists.
All these mobile sets, I sell them off at Alaba International market, Ojo, at prices ranging from N7000 to N8000, depending on their brands.
“At the last operation which I was caught, we were four in number, Efe, Sunnero and another unidentified guy. We met that same Friday over the raid at a club house at Agric, Ojo, where we strategised and also, perfected our operational plans for the night”, said Ekene.
He claimed to be the first of the three children of his family.
In a related development, one Afeez Dauda has also been arrested for robbery.
The 21-year-old suspect, who hails from Ibadan, Oyo State capital, was arrested at Maryland where he wanted to snatch a mobile handset from a motorist in a traffic jam on Friday, October 23, 2015.
He was said to have been arrested by policemen from Ikeja Divisional Police Station who were on a routine patrol within the black spot in the area.
“I stay in Mushin. I was once a commercial bus driver, plying between Agege and Iyana Ipaja. I am married; my wife is pregnant now. What I noticed was that when my wife took in, my fortune turned bad. She is a bad luck in my life. I lost my job as a bus driver and we found it difficult to feed and that prodded me to resort to snatching handsets in traffic jams at Maryland. And it was one Ajadi who introduced me to the crime. He is alive, but on the run.
“I operate alone. I would leave home when it was time, because I usually operate between 7:00 and 8:00pm every day at Maryland. I began three months ago. I usually target motorists making or receiving calls while behind the wheels and have their glasses wound down.
“All the stolen items I take  to Ikeja Computer Village where I dispose them off to would -be buyers at give - away prices, depending on their brands”, said the Ibadan - born suspect.
Mr. Fatai Owoseni, Lagos State Commissioner of Police, while parading the two suspects, said investigations had been stepped up into the two separate matters and assured that the two suspects would be charged to court soon.