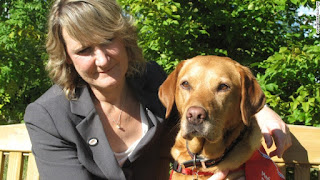 ATP - Lucy, a cross between a Labrador retriever and an Irish water spaniel, failed miserably at guide dog school. Curious and easily excitable, random scents distracted Lucy from her master's path, and it wasn't long before she was unceremoniously kicked out.
But her owners knew their smart dog held promise. They decided if her nose was getting her into trouble (she was after all, bred to be a hunting dog), why not train her to sniff out something useful?
For the next seven years, Lucy learned to sniff out bladder, kidney and prostate cancer, and was even used in a study. Over the years she has been able to detect cancer correctly more than 95% of the time. That's better than some lab tests used to diagnose cancer.


Now Lucy is part of one of the largest clinical trials of canine cancer detection. A British organization, Medical Detection Dogs, has eight dogs sniff out 3,000 urine samples from National Health Service patients to see if they can correctly discern who has cancer and who doesn't.
Claire Guest is the CEO of Medical Detection Dogs. Her fox red Labrador, Daisy, caught her breast cancer six years ago when she was 45. "She kept staring at me and lunging into my chest. It led me to find a lump," Guest remembers.
The tumor was deep in her breast. Her doctors said by the time she would have felt it herself, the cancer would have been very advanced.
"Had it not been drawn to my attention by Daisy, I'm told my prognosis would have been very poor," she said.
Dogs have two 'noses' 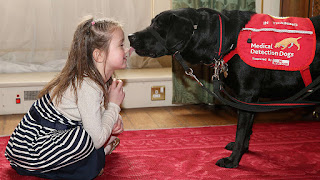 Dogs' powerful noses have 300 million sensors, compared to a human's measly 5 million. In addition, dogs have a second smelling device in the back of their noses that we don't have, called Jacobson's organ.
That double smelling system allows trained dogs to detect cancer's unique odors, called volatile organic compounds.
It took humans thousands of years to figure this out. In 1989, doctors at King's College Hospital in London wrote in The Lancet about a woman whose dog persisted in smelling a particular mole on her leg. That mole turned out to be early stage malignant melanoma.
Over the next 26 years, studies from France to California to Italy have concluded dogs really can detect the smell of cancer.
Researchers in the current British study have set a particularly high bar. They want to make sure dogs are actually smelling cancer and not something else, such as old age or a particular set of symptoms.
In the study, dogs will circle a carousel holding eight evenly spaced urine samples, one from a cancer patient and seven from patients who don't have cancer. At least one of those seven samples will be from someone around the same age as the cancer patient, and who had symptoms of cancer but didn't actually have the disease.
Guest, whose group is running the study, said if studies like hers continue to show the power of dogs' noses, the animals might one day be used in conjunction with existing diagnostic tests, not instead of them. Scientists might also design a machine -- an "electronic nose" -- that mimics a dog's powerful smelling abilities. "It's very feasible," Guest said.
But more then 25 years later, the awesome smelling powers of dogs has not met with commercial success.
Dr. Sheryl Gabram thinks she knows why. The Emory University surgeon published a study four years ago showing a machine, like a dog, could reliably detect the smell of breast cancer from patients' breath samples. Excited about their success, her team sought money for more studies. They failed.
"We submitted everywhere and could never get it funded to move the research any further," said Gabram, the surgeon-in-chief at Grady Memorial Hospital in Atlanta and director of the hospital's AVON Comprehensive Breast Cancer Center.
The problem, she thinks, is that while cancer-smelling dogs (or machines) make for great headlines -- one of her own patients received a great deal of publicity -- it's not always easy to envision how sniffing out cancer could be used commercially.
"It would need a lot of years of study and a lot of development," she said. "It's still far from that. People just thought it was too massive to embark on." It's too bad, too, she said, because "I think it's an area of research that's still promising."