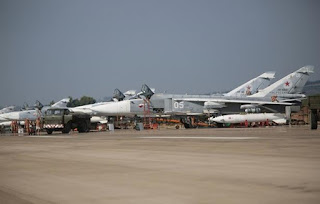 ATP  - Russia plans to expand its military force in Syria and deploy jets to a second airbase near Homs, according to a Kuwaiti daily with close access to Moscow’s military intervention in Syria.
Al-Rai reported Monday morning that a Russian intelligence brigade would deploy near the Al-Shayrat Airbase located approximately 35 kilometers southeast of Homs.
“The Al-Shayrat airbase houses around 45 airplane hangars, each of which is fortified in a way that prevents any damage if it is shelled or targeted,” sources in the Damascus joint operations room of the “4+1” military coalition of Russia, Iran, Iraq, Syria and Hezbollah told the newspaper’s chief international correspondent, Elijah J. Magnier.
“It also has a main runway and a 3 kilometer backup runway that engineering teams are working to prepare,” the sources added.
Russia currently conducts its air sorties from the Hmeimim airbase adjacent to Latakia’s International Airport, where it has deployed a force of approximately 50 aircraft since the late summer.


The report added that Moscow wants Hezbollah, Iranian Revolutionary Guard Corps (IRGC) and Iraqi militias fighting on behalf of the Bashar al-Assad regime to seize the ISIS-held towns of Qaryatayn and Palmyra, both of which are located near the Al-Shayrat base, in order to “prevent any shelling that might affect the Russian air forces inside it.”

The Homs town of Qaryatayn was seized by ISIS in early August, months after the extremist organization took control of the desert town of Palmyra—which lies on key logistical routes in eastern Syria—earlier in the summer.

The sources explained that “ground operations in the area around Palmyra will be launched once again after the joint forces reach the city’s limits. “

The report also said that “Russia has promised that it will increase the number of its planes to over 100 in the near very near future to meet the needs of the ground forces.”

Al-Rai’s Magnier has written a number of articles in recent weeks on Russia’s bombardment campaign in Syria, claiming access to sources in both the Baghdad and Damascus operation rooms for the “4+1” military coalition of Russia, Iran, Iraq, Syria and Hezbollah.

Russia began its aerial bombardment campaign in Syria on September 30, striking rebels in the Homs, Hama, Latakia and Idlib provinces while also claiming to have hit ISIS targets further east.
Despite Moscow’s claim it was hitting ISIS, most of its airstrikes have been conducted in coordination with Syrian regime ground operations against rebels in the northwest of the country.