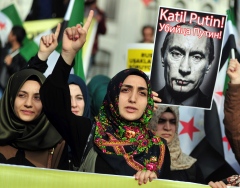 ATP - Russia announced Friday that it will suspend visa-free travel with Turkey amid the escalating spat over the downing of a Russian warplane by a Turkish fighter jet at the Syrian border.
Russian Foreign Minister Sergey Lavrov announced that Moscow will halt the existing visa-free regime starting Jan. 1, saying that Turkey has become a conduit for terrorists and has been reluctant to share information with Moscow about Russian citizens accused of involvement in terrorist activities.
Turkey's downing of the Russian military jet Tuesday, the first time in half a century that a NATO member shot down a Russian plane, has drawn a harsh response from Moscow. Russia has since restricted tourist travel, left Turkish trucks stranded at the border, confiscated large quantities of Turkish food imports and started preparing a raft of broader economic sanctions.


President Vladimir Putin has also ordered the deployment of the long-range S-400 air defense missile systems to a Russian air base in Syria just 50 kilometers (30 miles) south of the border with Turkey to help protect Russian warplanes, and the Russian military warned it would shoot down any aerial target that would pose a potential threat to its planes. The military also moved the missile cruiser Moskva closer to the shore to help cover Russian bombers om combat missions.
Turkish President Recep Tayyip Erdogan refused to apologize for the plane's downing, which Ankara said came after it flew for 17 seconds into Turkish airspace. At the same timed, Erdogan said he has tried in vain to speak by phone to Putin to discuss the situation and expressed hope they could meet at the sidelines of a climate summit in Paris next Monday.
Putin's foreign affairs adviser Yuri Ushakov said Friday that the Kremlin had received Erdogan's request for a meeting, but wouldn't say whether such a meeting is possible.
Asked why Putin hasn't picked up the phone to respond to Erdogan's two phone calls, he said that "we have seen that the Turkish side hasn't been ready to offer an elementary apology over the plane incident."
The tug-of-war between the two countries has been driven by a clash of their leaders' personal ambitions.
Putin and Erdogan have been frequently compared to each other. Both are populist leaders who frequently crack down on critics and often revert to anti-Western rhetoric. They had enjoyed close relations until recently, despite differences over Syria, and regularly exchanged visits. In September, Erdogan traveled to Moscow where he and Putin attended the opening of a new mosque, and they also met separately on the sidelines of the Group of 20 summit hosted by Turkey.
The summit in Antalya marked their deepening rift over Syria, when Putin showed fellow G-20 leaders aerial pictures of what he said were convoys of oil trucks carrying crude from fields controlled by the Islamic State group into Turkey.
Putin's move came as Russia, the United State and France all have focused their air strikes on the IS oil infrastructure, seeking to undermine the group's financial base following the terror attacks in Paris and the downing of a Russian passenger plane in Egypt.
Erdogan angrily dismissed the Russian accusations, but Putin retorted Thursday that it was hard to believe that the Turkish leadership didn't know about the illegal oil trade.
"We have no doubt whatsoever that this oil goes to Turkey, we are seeing it from the air," Putin said. "If Turkey's political leadership doesn't know anything about it, they should know now."
Lavrov said Friday that Russia strongly backs France's proposal to shut down the Turkish-Syrian border as a way to fight Islamic State fighters in Syria.