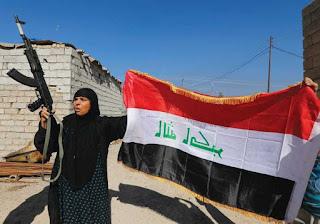 ATP - The official spokesman of the Islamic State in Iraq and ash-Sham (ISIS) announced the group’s rebranding as “Islamic State,” declaring itself a Caliphate and renaming its leader, Abu Bakr al-Baghdadi, Caliph Ibrahim.
He wrote: “The time has come for those generations that were drowning in oceans of disgrace, being nursed on the milk of humiliation, and being ruled by the vilest of all people, after their long slumber in the darkness of neglect – the time has come for them to rise. The time has come for the ummah [i.e. the nation] of Muhammad (peace be upon him) to wake up from its sleep, remove the garments of dishonor, and shake off the dust of humiliation and disgrace, for the era of lamenting and moaning has gone, and the dawn of honor has emerged anew. The sun of jihad has risen. The glad tidings of good are shining. Triumph looms on the horizon. The signs of victory have appeared.
“So rush O Muslims and gather around your khalifah, so that you may return as you once were for ages, kings of the earth and knights of war. Come so that you may be honored and esteemed, living as masters with dignity. Know that we fight over a religion that Allah promised to support. We fight for an ummah to which Allah has given honor, esteem, and leadership, promising it with empowerment and strength on the earth. Come O Muslims to your honor, to your victory. By Allah, if you disbelieve in democracy, secularism, nationalism, as well as all the other garbage and ideas from the west, and rush to your religion and creed, then by Allah, you will own the earth, and the east and west will submit to you. This is the promise of Allah to you. This is the promise of Allah to you."

“O soldiers of the Islamic State, you will be facing malahim [fierce battles] that cause the children’s hair to become grey. You will be facing fitan [tribulations] and hardships of many different colors. You will be facing tests and quakes. No one will survive them except he whom Allah grants mercy. No one will be firm during these fitan except one whom Allah keeps firm. The worst of these fitan is that of the dunya [worldly life]. So be wary of competing over it. Be wary. Remember the greatest responsibility that is now on your backs. You are now the defenders of the land of Islam and its guards. You will not be able to preserve this trust and defend this land, except by fearing Allah secretly and publicly, then by sacrificing, being patient, and offering blood.”

This is the enemy that so many in the West, particularly the political leadership in the US, is afraid to label Islamic fundamentalist extremism. Those who buy into the idea of IS and hope for a Caliphate to emerge understand that to make that happen, all of the non-believers of the world need to be destroyed.

Seems to me, therefore, that what people don’t want to realize, because it is so troubling to do so, is that World War III has begun (it actually began a while ago).

Once again we have a political entity that has set out on a path to destroy Western civilization as we know it, all in the name of fealty to their god. 60 years after the end of the last World War, when we thought everyone now understood the futility of 60 million people dying as a result, it is difficult to fathom how anyone in the world still believes that this is the way to solve problems.

But we are not dealing with an enemy that reasons logically. Rather we are faced with an entity that is driven by religious extremism and will do whatever it takes to bring the rest of us down. We, of course, cannot destroy that enemy without calling it what it is. The failure of the leadership of the most powerful nation on earth to recognize that fact and acknowledge it will contribute to the undoing of us all.

I hope we will be successful in defeating this enemy but it will not happen without, once again, significant loss of life. The sooner the leadership acknowledges that sad fact, the fewer people will die as a result. The longer we wait the higher the casualty rate. World War II should have taught us that lesson loud and clear. Had the West acknowledged the threat in 1939 and not tried to appease the maniacs fewer people would have died.

In Egypt a few weeks ago the Russians and the Egyptians were taught a painful lesson, with the bombing of a commercial airliner killing all 224 people aboard. The French were taught a similarly painful lesson on November 13 when over 130 were killed in multiple attacks in Paris.

The US should have learned its lesson in 2001 with the bringing down of the twin towers of the World Trade Center, as the UK should have learned in 2005 when London was attacked. For the better part of 14 years we have watched radical Islam gird its loins for a clash of civilizations with the West and the response has been tepid at best, sorely lacking at worst.

To win this war the West will need to fight on the ground to root out every last vestige of this insanity masquerading as a political liberation movement. Yes, there will be a large loss of lives and sons, daughters, husbands, wives, fathers and mothers will return home in body bags.

But if action is not taken now there won’t be enough body bags available to handle the casualties in a war delayed by the inactions of politicians who continue to dream about the merits of diplomacy. World War III has begun and we dare not sit on the sidelines this time.

In the Babylonian Talmud, Tractate Berachot 58a, it says clearly “If a man comes to kill you, rise up early and kill him first” which is based on what is written in the 22nd chapter of the Book of Exodus. There are people now who openly say they want to kill us and we have an obligation to rise up and kill them first, lest we all become slaves to their version of a political entity.
Posted by Unknown at Tuesday, November 24, 2015