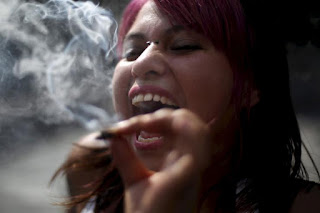 ATP - Mothers who used marijuana during pregnancy were found to have improved the visual ability of their babies. A new study shows that the exposure to marijuana while in the womb can significantly enhance the ability to track moving objects at the age of four.
Marijuana has improved the children’s global motion perception, which is involved in motion processing and visual-motor control. The findings could help health professionals to counteract the negative effects of drug use in pregnancy, researchers say.
The findings come from the results of a visual test in a group of four-year-old children who had been exposed to combinations of marijuana, alcohol, methyl amphetamines or nicotine while in the womb.


Researchers found that exposure to alcohol during pregnancy delivered a negative effect, while nicotine and methamphetamine have no effects on the vision of the children.
"We were surprised with this initial finding," researcher Ben Thompson, a professor at the University of Waterloo, School of Optometry and Vision Science, said in a press release. "It shows that marijuana and alcohol can have quite an impact on a fundamental aspect of the visual processing happening in our brains.”
Despite the beneficial impact of marijuana on the development of the brain's visual system, researchers noted that it has no beneficial effect on foetal development. In addition, earlier study shows that marijuana can actually impair the brain development of unborn children.
Researchers say that more studies are needed to fully determine the beneficial effects of marijuana in infants before providing any advice about its use.
"We don't know how widespread this effect is on other parts of the brain's visual processing areas," Thompson said. The study was published in the journal Scientific Reports.
For the study, researchers used a modified global motion perception test to measure the dorsal pathway performance of the children. The test required the children to track a group of moving dots across a screen to measure their visual ability.
"The advantage with this type of vision testing is that performance can be measured precisely," Thompson said. "In the future we hope to be able incorporate brain imaging with the global motion perception test to understand how and why these drugs are interacting with the visual parts of our brains."