Why a 'war' on terrorism will generate yet more terrorism 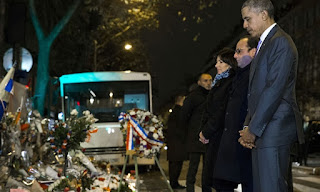 ATP - MPs preparing to vote on whether or not to bomb Isis in Syria would do well to read an article in Foreign Policy magazine, The threat is already inside, and nine other truths about terrorism nobody wants to hear.
Written by Rosa Brooks, a law professor at Georgetown university who has served as an adviser to the US state department, it places the Paris attacks - and all acts of terrorism by Isis - in perspective:
“Occasional terrorist attacks in the west are virtually inevitable, and odds are, we’ll see more attacks in the coming decades, not fewer. If we want to reduce the long-term risk of terrorism — and reduce its ability to twist western societies into unrecognisable caricatures of themselves — we need to stop viewing terrorism as shocking and aberrational, and instead recognise it as an ongoing problem to be managed, rather than ‘defeated.’”


She concedes that “politicians don’t like to say any of this” and goes on to list nine “painful truths”. In short form - you need to read Brooks’s piece in full - they are:
1: We can’t keep the bad guys out. All borders are permeable. There aren’t enough guards in the world to monitor every inch of coastline or border
2: Besides, the threat is already inside. The 2005 terrorist attacks in London were carried out by British citizens, the Boston Marathon attack was perpetrated by a US citizen... and the Paris attacks appear to have been carried out mainly by French citizens. Every country on earth has its angry young men.
3: More surveillance won’t get rid of terrorism, either. As Edward Snowden’s 2013 leaks made clear, the United States is already surveilling the heck out of the entire planet and so are half the governments in Europe. The trouble is, the more data you collect — the more satellite imagery and drone footage and emails and phone calls and texts you monitor — the harder it gets to separate the signal from the noise.
4: Defeating Isis won’t make terrorism go away. Aside from Isis, there is Nigeria’sBoko Haram. Before Isis, there was al-Qaida and before that there was Hezbollah and Hamas... and before that there was Abu Nidal, Black September and various other PLO factions. And it’s not just Islam. Right-wing extremists in the United States still kill more people than jihadis. The 2011 attack in Norway — which left 77 people dead — was carried out by a single far-right terrorist. Since 2006, more than half of all deaths in terrorist attacks in the west have been caused by non-Islamist “lone-wolf” attackers.
Advertisement
5: Terrorism (in the west) remains a relatively minor threat. Between 2000 and 2014, only 2.6% of terrorism victims in recent years lived in western countries.
6: But don’t relax too much, because things will probably get worse before they get better. From a historical perspective, the relative safety and security currently enjoyed by those in the western world is anomalous. The history of the west is every bit as violent as the modern Middle East. The world is likely to see an uptick in violent conflict in the coming decades, and the west is unlikely to be fully spared.
7: Meanwhile, poorly planned western actions can make things still worse. The fat, happy, over-privileged west wants to turn away the hundreds of thousands of desperate Muslim families seeking shelter and peace, just because a tiny fraction of those refugees might be militants. Islamic militants couldn’t ask for a better recruiting gift. The same goes for stepping up military action against Isis.
8: Terrorism is a problem to be managed. We can’t “win” a “war” against terrorism or terror or terrorists any more than we can “win” a war on crime or drugs or poverty. But we can adopt sensible policies to reduce the risk and damage caused by terrorist attacks, such as funding moderate Muslim organisations. If we’re creative in our approaches, we can find ways to make terrorist attacks a little harder to carry out successfully, and make successful attacks less rewarding to those who carry them out.
9: To do this, however, we need to move beyond the political posturing that characterises most public debates about counter-terrorism, and instead speak honestly about the costs and benefits of different approaches.
Brooks concludes by arguing against overreacting to terrorism. “We need to stop viewing terrorism as unique and aberrational. The more we panic and posture and overreact, the more terrorism we’ll get.”