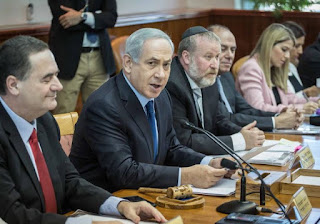 Netanyahu, who told ministers that indictments were filed last week against citizens planning to join the terrorist group, added that he has asked Attorney-General Yehuda Weinstein to advance steps to revoke their citizenship as well.


“Whoever joins ISIS will not be an Israeli citizen. And if he leaves the borders of the state, he will not return. I think this lesson is becoming increasingly clear throughout the international arena, and it is fitting that we lead this effort as well,” Netanyahu said.

Discussions about revoking citizenships of nationals joining Islamic State have been taking place for months around the globe, from Australia, to Norway, Britain and the US.

One government official said that Netanyahu’s request to Weinstein was the start of what will be a protracted process.

The Justice Ministry, asked about the legal basis of such a move, simply referred to the terms of the Citizenship Law and to the Prime Minister’s Office for further explanation.

Over the past few years, many Israeli Arabs have been convicted of joining Islamic State, but prison sentences have carefully distinguished between those whose intentions were directed at Israel, as opposed to Syrian President Bashar Assad, or were nonviolent.
Posted by Unknown at Monday, November 23, 2015