Pope, in Kenya, Calls for Compassion for Poor and Nurturing of Youth 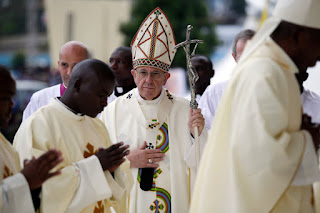 ATP - At a rain-soaked Mass on Thursday morning with thousands huddled before him, Pope Francis called for Kenyans to remember the poor, tap into the idealism of youth and protect “the innocent unborn.”
Francis seemed to be drawing from his signature mix of progressive and traditional Roman Catholic beliefs for the message delivered at the University of Nairobi in the Kenyan capital. Under a steady downpour, Francis told those in the crowds, who had been waiting for him since dawn with their umbrellas spread tip to tip, “May you always be concerned for the needs of the poor, and reject everything that leads to prejudice and discrimination, for these things, we know, are not of God.”


This is Francis’ first official trip to Africa, a continent where the number of Catholics is growing. The visit also comes at a time when African bishops and cardinals have been playing an increasingly influential role in the direction of the church.
Earlier on Thursday, Francis met with leaders from Kenya’s religious communities, including Buddhists, Muslims, Hindus and Sikhs, and two individuals who described themselves as “traditionalists.”
Photo

Francis called for Kenyans to remember the poor, respect the environment and protect “the innocent unborn.” Credit Andrew Medichini/Associated Press
The pope said that dialogue between religions was not a “luxury” or “optional.” It is “essential,” he said, “something which our world, wounded by conflict and division, increasingly needs.”
One person at the meeting of religious leaders said he was surprised by how subdued Francis seemed. “I was expecting this little ball of energy to fill the room with his energy and aura, but that wasn’t the case,” said the person, who did not want to be identified because of the delicate nature of talking about the pope. “He seemed terribly, terribly tired.”
But, the person added, when he had the chance to meet Francis at the end of the meeting: “It was different. He was very warm, he made eye contact, you could see a sparkle.”
Francis mentioned the recent spate of terrorist attacks in Kenya, in which hundreds of civilians have been slaughtered by the Shabab, a militant group from Somalia.
“All too often, young people are being radicalized in the name of religion to sow discord and fear, and to tear at the very fabric of our societies,” Francis said. “How important it is that we be seen as prophets of peace.”
Security has been extremely tight during the whole of the pope’s visit to Kenya, which began on Wednesday afternoon with the 78-year-old pontiff rolling into town from the airport in a Honda Civic. The Kenyan officials all around him were riding in black Mercedes sedans, and Kenyans have praised Francis’ humility, saying their politicians could learn a thing or two from him.
More than any recent pope, Francis has cast himself as a champion of the poor. On Friday, he plans to walk the muddy footpaths of one of Nairobi’s harshest slums, Kangemi.
After visiting the slum and holding a few other meetings, Francis will fly to Uganda and then to the Central African Republic, an extremely poor nation in the midst of a religious war.
At the Mass on Thursday in Nairobi, he arrived in his special “popemobile,” waving from behind a protective plastic covering while a squad of Kenyan security agents jogged behind him, in jacket and tie, their faces slicked with rain and sweat.
The pope leaned out to touch people as he made his way through the parting crowds, which had begun assembling at a field on the grounds of the university at 4:30 a.m.
The Kenyan news media estimated the crowd at 200,000. One Kenyan television station reported that scores of eager worshipers had been injured in a push for space.
The Mass had a distinctive Kenyan flair, with priests banging barehanded on giant bongo drums and even Kenya’s president, Uhuru Kenyatta, an observant Catholic, swishing his hips and dancing in place as he waited for the pope’s homily.
The pope finished his message with a Swahili touch. “Mungu ibariki Kenya!” he said, or “God bless Kenya!”