A Syrian opposition watchdog has reported that airstrikes - allegedly by Russia - have killed and wounded civilians. Russia, a staunch ally of President Bashar al-Assad, first began airstrikes in Syria in late September 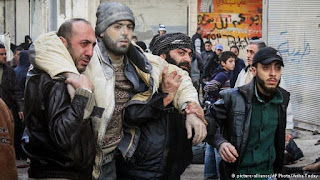 Russia has intensified its air strikes in Syria's northwestern province of Idlib, close to the Turkish borders, as a top Iranian official arrived on Sunday in capital Damascus for meetings with top official, reports said.
The Russian warplanes struck several rebel-held areas in Syria near the Turkish borders, such as the Syrian town of Harem near the al-Rihaniyeh town in Turkey, and the Sma'an Mountian in the western countryside of Aleppo, also close to Turkey, activists said.


Meanwhile, the Turkey-based oppositional Syrian National Coalition (SNC) said Russian bombed a popular market in the town of Arihah in Idlib on Sunday, killing 40 people and wounding tens of others. Other activists placed the death toll at 20.
The opposition report could not be independently verified.
In the wake of the downing of its war jet by Turkey, Moscow has recently concentrated its air campaign against the rebel-held areas on the Syrian-Turkish borders in the latest push to control the loose borders, from which thousands of foreign jihadists poured into Syria.
The strikes in recent days also targeted several rebel-bound convoys coming through Turkish border-crossings.
The Syrian government repeatedly accused Turkey of supporting and allowing the terror groups to move freely through the borders.
A day earlier, The Syrian army said it had information that Turkey increased its support to the militant groups in Syria in exchange for stolen Syrian and Iraqi oil and artifacts, according to the state news agency SANA.
The military statement further charged that rebel convoys move freely through the Turkish borders, adding that what Turkey pretends to be humanitarian aid is nothing but weapon shipments.
"The Turkish authorities have insisted on creating a state of loose borders on the Syrian-Turkish borders, which facilitated the flow of terrorists from Syria to Europe," the statement said.
It added that the Turkish forces struck positions of the Syrian army on Friday.
The cross-border tension was apparently triggered by the Turkish downing of the Russian warplane, and the current intensified Russian strikes appears to be a retaliation from Moscow against Turkey and its allied rebels on ground in Syria.
Russia has been a staunch supporter of Damascus, while Turkey has been a strong advocate to unseat current Syrian leader, President Bashar al-Assad.
With the tension increasing on ground, a senior aide to Iran's supreme leader Ayatollah Ali Khamenei arrived in the capital Damascus on Sunday for meeting with Syrian officials, according to SANA.
Ali Akbar Velayati, who advises Khamenei on foreign affairs, is expected to discuss the recent development on the political and military arena in Syria.
His last visit to Syria was in May, when he renewed his country's support to Syria.
Iranian Shiite fighters have been fighting alongside the Syrian army in several areas, most recently in the northern province of Aleppo, where the military forces backed by the Lebanese Hezbollah group, Shiite Iranian fighters and Russian air strikes, unleashed a wide-scale offensive earlier this month to capture areas in southern Aleppo, Syria's second largest city and economic hub.