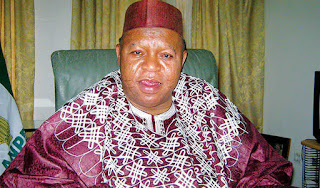 ATP - The candidate of the All Progressives Congress in Saturday’s governorship election, Abubakar Audu, has died, his friend and close associate has confirmed to PREMIUM TIMES.
“Audu is gone,” the distraught associate, who requested not to be named, told our reporter on the telephone.
Though too shattered to provide details of the politician’s passing, he confirmed he was in the candidate’s company when he passed on.


The source said the former governor suddenly took ill and was being rushed to Abuja preparatory to being flown abroad when he passed on.
The Independent National Electoral Commission had declared the Saturday governorship election inconclusive, but Mr. Audu was in a pole position to be declared winner eventually.
A PREMIUM TIMES reporter who visited the APC candidate’s Lokoja residence said, “I am currently at Audu’s Lokoja residence. Supporter are thronging the residence, anxious to confirm the news of the politician’s death.
“There is no close relative or political associate to confirm the report. Supporters are praying, “It shall never be true” and “holy fire shall consume anyone that says Audu is dead.”
Meanwhile, a supporter said the news of the sudden illness, and later death of Mr. Audu stalled celebration at his residence Saturday afternoon.
“As we were preparing for the celebration and awaiting Prince Audu, one politician came and said we should stop drumming,” the supporter said.
More to come….