UK air strikes against Isil in Syria will fuel the rise of terror, says Bashar al-Assad 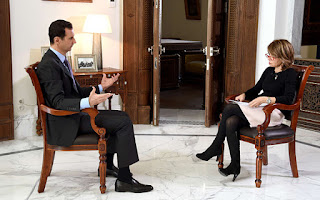 ATP - The UK's bombing campaign against Isil fighters in Syria is "illegal" and will only cause the “cancer” of terrorism" to spread, Bashar al-Assad has said in an interview published on Sunday.
The Syrian president mocked Britain’s decision to launch air strikes, blaming the West for the rise of the terror group, as well as for the deaths of hundreds of thousands of Syrians.
An RAF Tornado jet takes off from RAF Akrotiri in Cyprus after MPs in the House of Commons voted to bomb Isil in Syria  Photo: JULIAN SIMMONDS/The Telegraph
Speaking from the tranquil surroundings of his Damascene palace, shielded from the distant thuds of war in the suburbs, Assad said the UK's actions would "support terrorism".
“It will be harmful and illegal and it will support terrorism, as happened after the coalition started its operation a year or so [ago] because this is like a cancer,” Assad said.


Although published on Sunday, the interview with the Sunday Times took place shortly before British MPs voted to extend air strikes against Islamic State of Iraq and the Levant (Isil) to Syria last week.
David Cameron’s insistence on the plan came partly as a response to Isil’s coordinated terror attacks on the streets of Paris on November 13, which killed 130 people.
In reference to that massacre, Assad described Europe, and not Syria, as the key ‘incubator’ for terrorism.
“How many extremist cells now exist in Europe? How many extremists did you export from Europe to Syria? This is where the danger lies. The danger is in the incubator,” he said.
David Cameron speaking in the House of Commons  Photo: BBC
The Syrian leader also dismissed the government’s claim that Britain may one day call upon the military support of some 70,000 moderate rebels as “classical farce”.
“This is a new episode in a long series of David Cameron’s classical farce... Where are they? Where are the 70,000 moderates he is talking about? There is no 70,000. There is no 7,000.”
The Prime Minister had referred to the figure in parliament earlier this month while making the case for military action against Isil in Syria.

Rebels and analysts have already pointed out that the figure refers mainly to armed opposition groups who are already engaged across an array of different front lines across the country, fighting forces loyal to Assad and his Iranian and Russian backers.
The Syrian leader used the wide-ranging interview to question Britain’s “will to fight terrorism”, saying Mr Cameron’s strategy was doomed as it was not “comprehensive”.
“It has to be from the air, from the ground, to have co-operation with troops on the ground — the national troops — for the interference to be legal. So I would say they don’t have the will and don’t have the vision on how to defeat terrorism,” he said.
A similar view has also been put forward by Assad’s greatest critics, albeit calling for support for a rebel, and not a regime, ground force. But they say that Isil cannot be defeated while the regime stays in power, that the president’s inner circle have fuelled the rise of both Isil and its forerunner, Islamic State of Iraq.
Forces loyal to Assad have also killed seven times more civilians than Isil in Syria, a fact which recently caused Mr Cameron to describe Assad as one of the terror group’s main “recruiting sergeants”.
As Syria’s war approaches its sixth year, more than a quarter of a million people have been killed and over half of the country’s pre-war population has been displaced. Tens of thousands of people have also died within the country’s jails, where torture and murder have been carried out on an industrial scale.