The Minister of State for Petroleum Resources, Dr Ibe Kachiwkwu, on Wednesday said the ministry would focus on boosting revenue generation through the discovery of more oil and gas in the country. 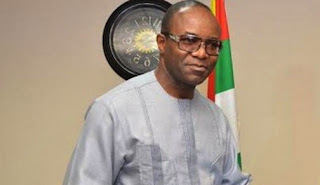 Kachikwu announced this while fielding questions from newsmen during his assumption of office in Abuja.
He said that part of his mission was to cut costs, block leakages while promoting transparency and accountability in the business of the ministry.
He said it was important for all stakeholders in the ministry to devise new ways of doing things, given the vantage position of the ministry as a major source of revenue to the federation.


According to him, it is necessary to think of new ways of doing business, given the dwindling nature of revenues accrued to the nation.
“Our policy direction is to find more money, find more oil, find more gas, monetise them and put money in the hands of the government.
“We have dwindling resources and yet the whole nation depends on this ministry to provide the resources.
“So we must be able to put on the cap on how do we cut cost; how do we improve on earnings; how do we make Federation Account to improve?.
“How do we put controls that are essential to avoid leakages; how do we develop new income strings?.
“How do we develop new investments to help the federation stabilise; those are very key and that is where we are heading to.”
Kachikwu, who also doubles as the Group Managing Director of NNPC, noted that the proposed work in the ministry would change the way and manner things were done in the past.
He said it was important for the leadership of the ministry in all areas to key into the change mantra of the present administration.
“There is a lot to be done. It is not racing for racing sake; it is racing to change the way things are done in this place.
“We will absolutely require you to show an ability to deliver the sort of change mantra that we are looking for and undergoing.
“This cannot be done by one person; I do not have the magic wand, but I might have some good ideas and those ideas will come from all of us and all of us will have to buy into it.
“My direction will also be clear; I don’t believe in vague direction; I believe in very clear and transparent direction and we have a very clear line in terms of where we are going.
“As far as the president is concerned, there are very key substantial deliverables; one is that the working environment and perception about this ministry must change.
“We are working hard as we are doing in NNPC, but people here who actually are in the supervisory environment over and above NNPC must even do more.”
On reduction of crude allocation to NNPC, Kachikwu said an analysis on what the total real consumption of oil was still on-going.
He said efforts were on to ascertain if Nigeria actually consumed up to 40 million litres of oil, noting that statistics were showing that Nigeria was consuming closer to 35 million litres.
On gas production, the minster said his aim in the ministry would also focus on global blue print on gas development.
He said developing the gas sector would involve a lot of money, noting that the ministry would do everything possible to raise the money needed for the development of the sector.
“We will drill and get more gas; distributing gas is key; a lot of gas presently are stranded in various fields and the issue is to get the required pipelines to transport the gas.
“The south-north gas line are key; we will see how they can be completed and taken to other aspect of the country so that the rest of the country can benefit from the gas resources we have in the south.
He said one of key investment drive was to focus on how to get money into the gas environment and develop the nation’s gas policies to attract big companies into the sector.
On pockets of fuel queues in some fuel stations in the country, he said the president was putting necessary steps to ensure that oil marketers received the money approved by the Federal Government.
“The money was approved by the president; the money has not reached them physically; there are processes required in the constitution; the president is taking time to write to the National Assembly.
“The money has been provided; the president is working on that and soon they will get the money.
He noted that the fuel queues playing out in some parts of the country were orchestrated by the operators of some fuel stations.
He said enough fuel had been made available in all the states of the federation, noting that what was playing out was panic buying.
“There is enough fuel; the absence of the products is not the issue; what is happening is panic buying; a total of 4,000 trucks was injected in the country.
“And the normal utilisation is 2,000 trucks, but people get the fuel and stock them.
He noted that that the Department of Petroleum Resources (DPR) was putting measures to ensure the issue of panic buying was eradicated.
“We are ensuring that the product is made available to all and the queues you see will disappear by the end of the day.”
On the Petroleum Industry Bill (PIB), Kachikwu said that efforts were on to engage the relevant stakeholders and the Senate, to fine-tune the PIB.
Ealier, the Permanent Secretary, Ministry of Petroleum Resources, Dr Jamila Shu’ara, said the minster was coming at a time the international oil market was in turmoil.
She said that the appointment of the minister was a welcome development, given the crisis in the international oil market.
Shu’ara said the ministry would support the minster to achieve his lofty aim for the ministry and the nation at large.