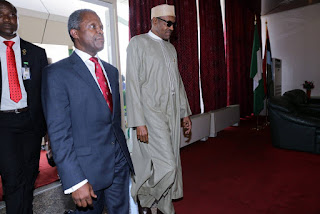 ATP - Vice- President Yemi Osinbajo on Sunday said there was no justification for people in North-East of Nigeria to remain in the Peoples Democratic Party (PDP).
Osinbajo stated this when many members of PDP decamped to the All Progressives Congress Party (APC) in Dutse, the Jigawa state capital.
Osinbajo, represented by the Speaker of the House of Representatives, Mr Yakubu Dogara, said it was never too late for anyone wishing to join APC to do so.
“There is no justification for anyone in the north-east to remain in PDP.


“Therefore, I call on all my brothers and sisters in north-east to join our great party -APC.
“This is because we want all hands in building Nigeria, our great nation. You can never be too late in joining the APC”, he said.
The vice president therefore called on all in the north-east to join APC to build the nation together.
Osinbajo further called on those yearning for change to exercise patience, adding that President Muhammad Buhari would soon unveil the programmes he had for the nation.
“I want assure those who are saying that they are tired of waiting to see the change. The change is coming soon as discussions are ongoing.
“The President will soon reveal the programmes of the APC when he presents the 2016 budget on Tuesday.
“You will see the mindset of the president who is ready to reposition the country”, the vice-president said.
He urged Nigerians to pray for the president and the APC to succeed. (NAN)