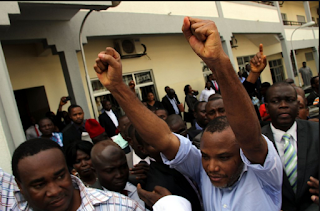 ATP - The Federal Government of Nigeria has filed fresh charges of treasonable felony managing an unlawful society on Nnamdi Kanu.
In the charge-sheet signed by the Director, Public Prosecution (DPP), Mohammed Saidu Diri, for the Attorney-General of the Federation, Kanu and the two others were charged with treasonable felony which is punishable under Section 41(C) of the Criminal Code Act, CAP C38 Laws of the Federation of Nigeria.


The charge-sheet read in part: “That you, Nnamdi Kanu and other unknown per- sons, now at large, at London, United Kingdom, between 2014 and September, 2015 with intention to levy war against Nigeria in order to force the President to change his measures of being the President of the Federation, Head of State and Commander-in-Chief of the Armed Forces of the Federation as defined in Section 3 of the Constitution of the Federal Re- public of Nigeria 1999 (as amended) by doing an act to wit: Broadcast on Radio Biafra your preparations for the states in the South- East geo-political zone, South-South geo-political zone, the Igala Community of Kogi State and the Idoma/Igede Community of Benue State to secede from the Federal Republic of Nigeria and form themselves into a Republic of Biafra, and thereby committed an offence punish- able under Section 41(C) of the Criminal Code Act, CAP C38 Laws of the Federation of Nigeria 2004.”
On count two of the charges, the federal authorities also accused the trio of managing an unlawful society.
Kanu was born in Isiama Afara, Abia State, Nigeria. His father is HRM Eze Israel Okwu Kanu (JP) and his mother is Ugoeze Nnenne Kanu.He attended Library Avenue Primary School (now part of Government House, Umuahia) and went to Government College for his secondary education. He later gained admission to the University of Nigeria Nsukka (UNN), where he could not finish due to incessant strikes before he left for London to complete his tertiary education.
On October 18, 2015, it was reported that Mr Kanu had been arrested in Lagos State by Nigeria’s secret police the Department of State Services (DSS).Mr Kanu had told his solicitors that he was, on 14th October, 2015, arrested by the agents of the Federal Government of Nigeria, the State Security Service (SSS) in his hotel room i.e. Golden Tulip Essential Hotel Ikeja, Lagos State.The solicitors in a press briefing said, between 14th and 17th October, 2015 their clients where about were unknown until 18th of October, 2015, when the Press Media broke the news of his arrest and detention by the SSS in Abuja.The news of the arrest of Mr Kanu generated mass protests across parts of Enugu State,Abia State,Imo State.
On October 19, 2015, it was reported that Mr Kanu had been granted bail after a secret arraignment at Magistrate Court,Wuse 11.However, the bail seemed “controversial” and there were claims the DSS announced the bail only “to calm the angry people of Biafra”. Although the bail conditions were stringent some of which required the Certificate of Occupancy of a landed property within Abuja municipality, a level 16 officer in the Ministry, Mr Kanu’s lawyer said they eventually met the requirements in full.
However, “upon the issuance of the Form 36,the court ordeal went to execute the order but came back unsuccessful. He was unable to produce the prisoner.The lawyer, Vincent Obetta, called the continued detention of the activist despite meeting his bail conditions “a clash between judiciary and executive” in a democratic Nigeria. According to Mr Obetta, “I have not seen or heard any place where a court grants bail and the person is not released. Under UN and Africa charter, it is enshrined that once bail is granted, you release the person upon meeting the bail conditions. We are sliding to days of Decree 2 and 4 of 1984. This is pure Dictatorship.”
A Conservative minister said the British consular officials will visit Mr Kanu following enquiry from the activist’s constituency MP, Harriet Harman. James Duddridge, Minister for Africa and the Caribbean confirmed that Kanu, had been visited earlier by members of the Foreign and Commonwealth Office but that he did not ask for British consular assistance.
On 5 September 2015, Mazi Nnamdi Kanu was a guest speaker at the World Igbo Congress which was held in Los Angeles, California where he demanded for guns and bullets as the video depicted.
On 20 October 2015, Vanguard announced that Kanu had been released on bail. However, media sources supporting the objectives of IPOB called the bail “controversial” and claimed the DSS announced the bail only “to calm the angry people of Biafra”.