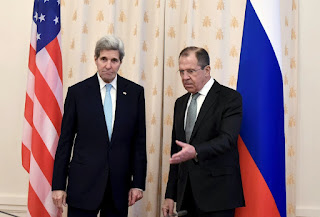 ATP - Russian support for the government in Syria and separatist rebels in Ukraine topped the agenda Tuesday as Secretary of State John F. Kerry sat down with Russia’s foreign minister in advance of talks with President Vladimir Putin.
As Kerry and Sergei Lavrov settled on opposite sides of a table in an opulent conference room in Russia’s foreign ministry, Kerry reiterated the U.S. position that the primary threat comes from the Islamic State fighters both Washington and Moscow consider terrorists, not the anti-government fighters Russia has been bombing heavily.
“These are the worst of terrorists,” Kerry said. “They attack culture, history, and all decency. And they leave no choice but for civilized nations to stand together, and to fight and push back, and destroy them.”

In between, he marked two personal milestones. He turned 72 on Friday. And he logged travel miles that pushed him past a total of 958,000, breaking Hillary Clinton’s record and putting him on track to surpass Condoleezza Rice next year to become the most traveled secretary of state in U.S. history. One way he survives his grueling schedule is by wearing compression socks while in the air.