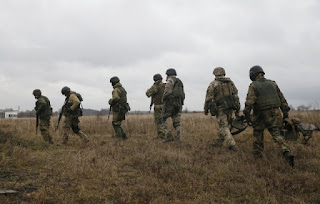 ATP - The warning is consistent with previous ones concerning the Ukraine conflict, reflecting continued uncertainty about the fate of the fragile cease-fire, which, despite a marked reduction of fighting since September, hasn’t taken hold fully.
“There have been multiple casualties due to land mines in areas previously controlled by separatists, and separatist leaders have made statements indicating their desire to push the front line to the administrative borders of the Donetsk and Luhansk oblasts,” the State Department warned, referring to the two separatist-controlled territories.
The statement continued: “Individuals, including U.S. citizens, have been threatened, detained, or kidnapped for hours or days after being stopped at separatist checkpoints.”
Packed within the warning, however, is a piece of good news: The cities of Kharkiv and Odessa (Ukraine’s second and fourth largest cities, respectively) were taken off the State Department’s latest advisory. A July travel warning included the two cities.
In an emailed statement to the Daily Signal, the State Department said it had “eliminated language urging citizens to exercise extreme vigilance in Odessa and Kharkiv” after “ongoing assessments of the security situation in those areas.”