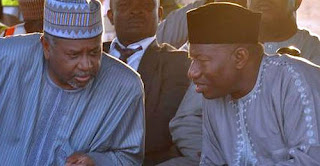 ATP - Former National Security Adviser (NSA) Sambo Dasuki has said he handed over the N10 billion given to People’s Democratic Party (PDP) nomination convention delegates to former President Goodluck Jonathan’s Special Assistant on Domestic Affairs, Waripamowei Dudafa and the aide-de-camp.
He said the money was given out by the two aides, on the directive of Jonathan, noting that, apart from collecting the cash, he had nothing to do with it.
As at press time, no slush funds had been traced to Dasuki’s personal accounts, it was learnt.
Dasuki, who protested that the Economic and Financial Crimes Commission (EFCC) had subjected him to “media trial”, said such a treatment might jeopardise his defence.
Also yesterday, it was gathered that the Central Bank of Nigeria (CBN) confirmed that the N10 billion was sourced from the Signature Bonus Account (oil block Account).
But the ex-NSA expressed regrets that he was being vilified by the EFCC when he acted on the instructions and approval of the President and Commander-in-Chief of the Armed Forces.