The U.S. would be burned by playing with Putin 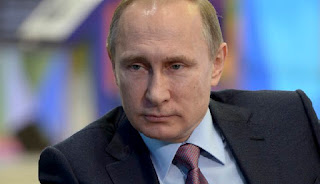 ATP - Secretary of State John Kerry met Vladimir Putin in Moscow last week and announced that he will accept Putin's demand that President Bashar Assad stay in power in Syria. This is the latest in a long list of Kremlin victories in undercutting President Barack Obama's global leadership and undermining the likelihood that we'll see peace and stability in Syria.
The Obama administration hopes that Putin will be a constructive partner in our war against the Islamic State. But the latest gesture will lead to the same disappointment that we've had every other time we've tried to work with Putin.

Putin's aggression is immune to disapproval from other world leaders. It's time to learn from past mistakes and stop trusting Putin to be a good-faith partner in international relations.
Putin has a long history of manipulative bullying, and we have no reason to expect that he will be any different in Syria. We have seen Putin's model of fighting insurgents in the decade-long war that he launched in Chechnya in 1999. First, Putin killed off every moderate Chechen leader he could find, both in Russia and overseas. Then he ran a scorched earth campaign that targeted civilians.
According to the International Crisis Group, war crimes and crimes against humanity in Chechnya committed by Russian troops included "indiscriminate shelling and bombing, secret prisons, enforced disappearances, mass graves, and death squads." The Russian approach to counter-insurgency is so barbaric that cooperation in Syria is unlikely to be constructive.
Russia has behaved savagely and indiscriminately in Syria since it entered the fray in September. Ninety percent of Russia's first bombing raids in Syria were directed at U.S. supported moderates. Since Russia started its air campaign, its targets in Syria have included hospitals, markets, bakeries, and grain silos, leading to thousands of civilian casualties and 260,000 displaced people. Such carnage will increase the ranks of terrorists and will sabotage international efforts to bring peace and stability to the region.
What we need in Syria is a coalition of European, Jordanian, Turkish, Saudi and Qatari allies who are willing to commit ground troops into northern Syria to create Sunni safe havens along the Turkish border and build a moderate Sunni Arab fighting force. A model for success is the Anbar Awakening in 2007 in which American soldiers won over the Sunni tribes by offering them protection from jihadists and by taking care to minimize civilian casualties.