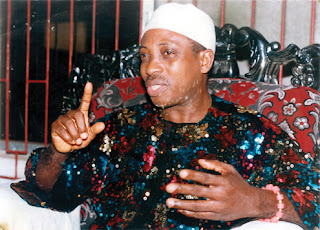 ATP - Biafra proponent, Chief Ralph Uwazuruike has cautioned expelled members of the Movement for the Actualisation of the Sovereign State of Biafra, MASSOB, against using the organisation to collect money from politicians.
Uwazurike, who is the founder of MASSOB, while speaking through the body’s National Director of Information, Sunny Okereafor, pledged not to compromise his leadership of the organization and the Biafra Independent Movement, BIM, noting that the two organizations have been repositioned to actualize the independent state of Biafra.


He said, “They should stop using MASSOB to collect money from politicians and the Federal Government. They should stop giving a bad name to MASSOB by working for politicians. This is not the time to collect money and continue deceiving Ndigbo.
“We are freedom fighters; expelled members like Uchenna Madu and other pretenders should stop commercializing the Biafra struggle. I will never compromise my leadership or work with politicians. We have restructured and strengthened MASSOB to actualize Biafra.
“This is why we have now made it compulsory that before you belong to BIM, you must have served in MASSOB for at least five years so that you will be able to understand our non-violent struggle. We have our structures in all the states of the former Eastern region; Biafran elders-in-council, Biafran zonal leaders, Biafran regional administrators and directors.
“We don’t want negotiation; it is either Biafra or nothing. Anybody who collects money from politicians or the Federal Government is on his own. They should stop deceiving Ndigbo. Biafra is the answer.”
Uwazuruike, who called on the Federal Government to respect the order of the court and unconditionally release the detained Director of Radio Biafra, Nnamdi Kanu, stressed that MASSOB will not seize in its push for the sovereign state of Biafra through non-violent protest.
“Federal Government should respect the court order and release Nnamdi Kanu. As for MASSOB, we will continue the protest for an independent state of Biafra through non-violent struggle,” he said