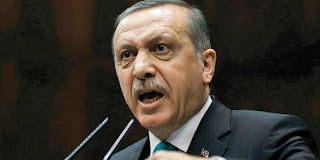 ATP - You know the country has really gone to the dogs when Washington’s main allies in its war on Syria are the two biggest terrorist incubators on the planet. I’m talking about Saudi Arabia and Turkey, both of which are run by fanatical Islamic zealots devoted to spreading violent jihad to the four corners of the earth. Not that the US doesn’t have blood on its hands too. It does, but that’s beside the point.
The point is that if you’re trying to sell your fake war on terror to the public, then you might want to think twice about lining up with Grand Sultan Erdogan and King Chop-Chop of Riyadh. The optics alone should have sent the White House PR team running for cover. I mean, couldn’t they have hired squeaky-clean Iceland to join the fray just to persuade the public that the ongoing proxy war wasn’t a complete sham. Which it is.