Buhari is spending money like a drunken sailor – Fani-Kayode 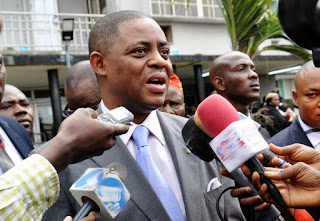 ATP - Following President Muhammadu Buhari’s presentation of the 2016 budget of the over N6 trillion before a joint session of the National Assembly on Tuesday, a chieftain of the Peoples Democratic Party, PDP, Chief Femi Fani- Kayode has accused the President of mortgaging the future of Nigerians stressing that the budget was insincere.
The former PDP Presidential Campaign spokesman, in a statement in Abuja yesterday, accused the Buhari administration of spending money like a drunken sailor.


Fani-Kayode stated that it was ironic that former Lagos State Governor, Asiwaju Tinubu; Minister of Transportation, Rotimi Amaechi and Governor Nasir El- Rufai who were all against deregulation during former President Jonathan tenure are now in support of deregulation.
Noting that the Buhari’s government was mortgaging the future of Nigeria, Nigerians and their children, he said, “The 2016 budget is fueled by insincerity, shrouded in fantasy, built on tall dreams and spawned by deceit, ignorance and the illusion of change. It is bloated, unrealistic, expensive, cosmetic and it will not result in anything good.
“In order to fund part of the budget the government intends to borrow money and this will throw our country into even greater debt. What a tragedy this is given the fact that in 2007 Nigeria was debt-free. The Buhari administration is spending money like a drunken sailor and they are borrowing as if there is no tomorrow, mortgaging the future of our nation and our children.
“We need far more fiscal discipline and seriousness than that if our government really wishes to improve the economy and better the lives of ordinary people.
“Meanwhile the Federal Government has said that President Goodluck Jonathan is responsible for today’s long fuel queues even though he left office 7 months ago.
“They seem to have forgotten that in 2012 it was their group, led by Bola Tinubu, Nasir El Rufai, Rotimi Amaechi and President Buhari himself that aggressively opposed deregulation and almost brought the whole country to a standstill with protests and riots all over the place in their efforts to prevent the government from removing the oil subsidy.
“Had it not been for their pettiness, lack of understanding, shortsightedness and double standards the subsidy would have been removed three years ago and fuel queues would have been a thing of history. Sadly they lacked the foresight to appreciate the virtues of that policy and today they have the nerve to blame Jonathan for the mess that they themselves essentially created.
“They have been in power for 7 months now: it is time for them to step up to the plate, start taking responsibility for their own actions, do a better job and stop blaming Jonathan for their own miserable and avoidable failures.”