Ukraine Refuses to Repay All Debt to Russia

Ukraine's government said that it will not repay any debt owed to Russia, which could trigger an international court case and jeopardize its IMF "lifeline." 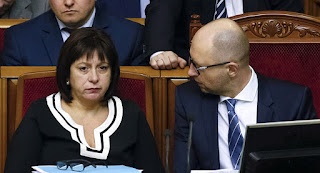 ATP - Ukraine has officially declined to repay Russia its $3 billion loan, due on December 20, effectively defaulting on its foreign debt.
Although the Ukrainian Finance Ministry announced that it would not repay the debt on Thursday, Prime Minister Arseniy Yatsenyuk reiterated the announcement on Friday, calling the inability to pay a "moratorium."
Other than the eventual court case against Ukraine, the deal may jeopardize the International Monetary Fund's bailout program for Ukraine, which requires the borrower country to reach a deal "in good faith."


"The Ukrainian government introduces a moratorium today on the payment of the so-called Russian debt," Yatsenyuk said.
Other than the $3 billion official debt to Russia, the moratorium includes $507 million owed by Ukrainian state-owned enterprises to Russian banks.
Russia previously said that it would take Ukraine to court if it fails to pay. Russia's Finance Minister Anton Siluanov said that the IMF's recognition of Ukraine's debt to Russia as sovereign could help in court.
Russia previously proposed a restructuring deal, which Ukraine refused to consider. Ukraine said that it would not repay the Russian debt because of the terms of a restructuring settlement with private