Syria Crisis Could Be over Soon If Foreign Extremism Support Ends: Assad 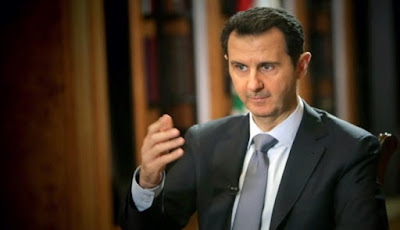 ATP - Syrian President Bashar al-Assad says the conflict in Syria could be finished in “less than a year” if foreign support for terrorism ends.
“If the responsible countries take actions against the flood and the flowing of terrorists (into Syria) and the logistic support, I can guarantee that it will take less than one year,” he said.
The Syrian president made the comments in an interview with Dutch television station NPO2 on Thursday, Syria’s official SANA news agency reported.
Assad said the problem is that the backing for terrorists operating in Syria continues on a daily basis in a bid to make the situation more chaotic and to put obstacles in way of any solution to the crisis.


“They want the solution, what they called a political solution, to be ended with the changing of this state, getting rid of this president or depose him, and so on. So, that’s why it will drag on,” he said.
“Only Russia and Iran and their allies, and the other countries that support politically the Syrian government or the Syrian legitimacy” are prepared to help resolve the crisis in Syria, President Assad said, adding, “but not the West; no-one in the West is ready, few countries are ready, because they don’t dare to make contact with Syria to solve the problem unless the United States wants to impose its agenda on them and on us.”
Assad, meanwhile, was sarcastic about the West's perceived softening of position on his removal.

"I was packing my luggage, I had to leave, now I can stay. We never care about whatever they say. They’ve been saying the same for four years now."
Assad said participation in the so-called US coalition allegedly targeting Takfiri Daesh terrorists in his country is illegal, because the military intervention doesn't have the Syrian permit.
“This is illegal. This is against the international law. We are a sovereign country. If you are serious about fighting terrorism, what is the obstacle for that government to call the Syrian government, to say 'let’s cooperate in fighting terrorism'?
"The only obstacle is that the Western policy today toward Syria is 'we need to isolate this state, that president, so we cannot deal with him.' Okay, you cannot reach anything then.”
The US-led coalition has been conducting airstrikes inside Syria without any authorization from Damascus or a UN mandate since September 2014. The mission has fallen severely short of dislodging the terrorists.
The Syrian conflict, which started over four years ago, has claimed the lives of more than 250,000 people and left over one million injured, according to the UN; Press TV reported
- See more at: http://en.alalam.ir/news/1770401?#sthash.rNNfgvlj.dpuf