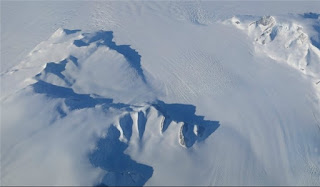 ATP - The continuous melting of ice at the poles of the Earth has been a powerful indication of the effects of global warming on our planet for quite some time now – and it's important to note these new results don't contradict the fact that glaciers are melting at an increased rate. But it does mean that, for the next few years at least, new ice gain is outweighing that loss.
"We’re essentially in agreement with other studies that show an increase in ice discharge in the Antarctic Peninsula and the Thwaites and Pine Island region of West Antarctica," said glaciologist Jay Zwally, lead author of the study. "Our main disagreement is for East Antarctica and the interior of West Antarctica – there, we see an ice gain that exceeds the losses in the other areas."


To reach this conclusion, the scientists pored over satellite data on Antarctic ice between 2003 and 2008, and discovered that there had been a net gain of 82 billion tonnes of ice per year over this time period.
Notably, this is less than in the years between 1992 and 2001, when the net gain was a whopping 112 billion tons per year.
The team calculated ice volume based on changes in surface height of the ice sheet, as measured by satellite altimeters. Antarctic ice is formed by snowfall that accumulates and slowly compacts into solid ice at a rate of less than 2 centimetres, or roughly 0.7 inches a year.
The researchers explain that this current rate of ice accumulation in East Antarctica has been occurring for the past 10,000 years, and is still outweighing the losses from collapsed ice shelves that see glaciers running off into the warming ocean waters, particularly on the coast of West Antarctica and the Antarctic Peninsula.
However, these findings contradict a 2013 report by the Intergovernmental Panel on Climate Change, which indicated a net loss of 147 billion tonnes of Antarctic sheet ice per year between 2002 and 2011.
So what's going on here?
According to University of Washington glaciologist Ben Smith, who wasn't involved in this study, these new results show how difficult it can be to determine small changes in ice height with satellite data alone.
"Doing altimetry accurately for very large areas is extraordinarily difficult, and there are measurements of snow accumulation that need to be done independently to understand what’s happening in these places," said Smith.
And as Slate columnist and meteorologist Eric Holthaus recently put it, Antarctica is notoriously difficult for us to comprehend: "The quantities of ice, and therefore, the potential impact on the global climate system is beyond human comprehension – but often, so are the timescales."
On top of that, there are still scientific challenges involved in getting the data right when it comes to figuring out what is really happening on the icy continent, and this new study appears to be an example of just that.
"The good news is that Antarctica is not currently contributing to sea level rise, but is taking 0.23 millimetres per year away," Zwally said in a press statement. "But this is also bad news. If the 0.27 millimetres per year of sea level rise attributed to Antarctica in the IPCC report is not really coming from Antarctica, there must be some other contribution to sea level rise that is not accounted for."
In more bad news, the researchers also predict that this long-term ice gain will only outweigh losses for another couple of decades, before catching up and finally creating an overall loss.
If the conclusion of this study proves correct, accounting for that 0.27 millimetres of sea level rise is going to be the next piece of the puzzle. And NASA researchers are already working on getting even better satellite data, with the highly accurate ICESat-2 scheduled to launch in 2018.