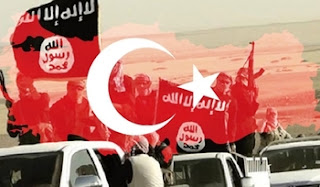 ATP - The mobile phone was found with one of the killed ISIL leaders in the Northern parts of Salahuddin province two days ago," Jabbar al-Ma'mouri told Soumeriya news on Monday.
He said that the mobile set and history files contain messages from the Turkish intelligence agency which show that Ankara supports the ISIL terrorist group through providing security at the points of entry used by ISIL militants from Turkey to Iraq.
"The mobile phone also contains other important information which cannot be disclosed now, and it has been delivered to the specialized security groups for further scrutiny," Ma'mouri said.


In relevant remarks on November, Russian Ambassador to France Alexander Orlov said that Turkey has played an "ambiguous" role in the campaign against the Islamic State of Iraq and the Levant (ISIL) while acting as an accomplice to the terrorist group’s activities.
Also last month, former US Department of State senior advisor David Phillips said Turkey has blatantly provided material support to the ISIL because they share an ideological connection along with a common foe in Syrian President Bashar Assad.
"Turkey’s role has not been ambiguous — it has overtly supported the ISIL," Phillips, currently Director of Columbia University’s Peace-building and Rights Program, said. "It has provided logistical support, money, weapons, transport and healthcare to wounded warriors."
Phillips explained that Turkey has been supporting the ISIL to remove Syrian President Bashar Assad from power and because of a "spiritual bond" that exists between Turkey’s governing party and the jihadists.