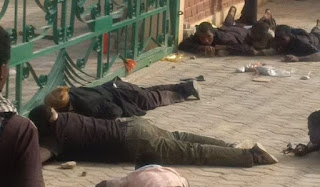 ATP - The Iranian parliament held an open session in Tehran on Tuesday, during which the legislators underlined the necessity for helping the Shiite population in Nigeria.
They also called for leaving no stone unturned, including trying back chennels at the Inter-Parliamentary Union (IPU), to assist the Muslims in Nigeria's Zaria region.
In response to the lawmakers' demands, Larijani underscored at this morning session that "specific measures are underway".
The Nigerian army attacked two religious centers of the country's Shiite community on Saturday, killing hundreds of defenseless civilians there. A few hours later on Sunday, the military wounded and arrested Leader of the Islamic Movement of Nigeria Sheikh Ibraheem Zakzaky after raiding his house and killing his son, assistants and hundreds of followers.
The Saturday and Sunday crackdown on the Shiite community by the Nigerian army that ended in the massacre of the Shiites in several raids has caused serious concerns in Tehran.
On Monday, Iran's Foreign Ministry summoned Nigeria's charge d'affaires in Tehran over the massacre of the Shiite Muslims in Zaria.