Is Russia gearing up for war with Turkey? 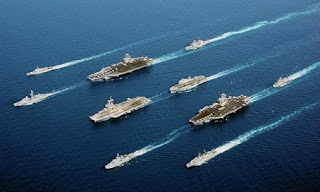 ATP - Captain Alexander Shvarts watched on as the iron covers whirred open on the air defense system aboard the Russian navy's Mosvka missile cruiser off the Syrian coast.
"This system can fire up to twelve missiles at any one time," Shvarts said Thursday during a highly choreographed press tour of the ship arranged by the Russian defense ministry. "The range is around 70 kilometers (43 miles)."
The Moskva - flagship of Russia's Crimea-based Black Sea Fleet - is the largest warship the Kremlin has sent to support its bombing campaign in the war-torn nation.
It is patrolling some 10 nautical miles (13 kilometers) offshore in the eastern Mediterranean.
Until about three weeks ago, the Soviet-era craft, built in 1983, was further out to sea providing protection for ships delivering supplies for the Russian base on land.
But after a Turkish F-16 fighter blasted a Russian jet out of the sky along the Syrian border it was ordered closer to shore to help ward off any future attacks on Russian planes bombing across Syria.


"Now our main task is to provide air cover for the Russian base at Hmeimim in Syria and for the Russian planes carrying our their tasks over the country," Shvarts said.
Nuclear capable
Russia has bolstered its bombing campaign in Syria from the water - firing cruise missiles from a submarine in the Mediterranean earlier this month and from warships in the Caspian Sea far to the east.
The Moskva, however, is designed primarily to take out other vessels at sea and aircraft in the sky and has not used any of its fierce array of weaponry in the Syrian operation.
That includes Vulkan missiles, designed to sink other warships. They can be armed with nuclear warheads, although there are none currently on board.
"It would be like shooting sparrows with a cannon," military spokesman Igor Konashenkov told AFP during a tour of the ship.
"These are just not the right weapons to use to hit our targets in Syria."
After the downing of its jet by Turkey Moscow also rushed its latest S-400 air defense system to the Hmeimim base in Syria.
That system has a range and capacity that far outstrips the weaponry on board the Moskva, meaning the ship may not have much strategic necessity.
But by dispatching a key warship like the Moskva - with its crew of some 500 - the Kremlin seems to be making a clear statement of strength.
During the press tour for some few dozen journalists from Russia, Syria and international outlets - the first of its kind to a ship involved in the Syria operation - the military proudly showed off the bristling array of hardware on board.
The huge gun turrets swiveled back and forth and rocket systems were primed for the cameras.
"Overall, including the Moskva, we have 11 vessels in this area involved in the operation, including landing ships, smaller missile boats and supply craft," said Commander Oleg Krivorog.
Now the Moskva remains roving up and down the coast of Syria - and it does not look like it will be returning to its home port of Sevastopol any time soon.
"We are waiting now for a rotation and to receive new crew," Captain Shvarts told AFP as he bid farewell to the journalists.
"As for any date on the end of our mission, that I am not going to