Light at the End of the Tunnel: Putin 'Puts Things in Order' in Syria

Russian President Vladimir Putin has been on fire lately – he not only managed to push through a Russian strategy in the Middle East, but also made both the United States and Saudi Arabia finally accept his point of view on finding a peaceful solution in Syria, French journalist Eric Verhaeghe wrote for Atlantico. 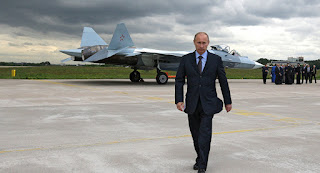 ATP  -  Recent events regarding peace negotiations in Syria speak for themselves: Moscow significantly decreased the military might of Daesh (Islamic State) with its airstrikes and has also played a leading role in finding a peaceful solution to the Syrian crisis with the successful passing of a UN resolution on Syria, the author said.
The fact that US Secretary of State John Kerry visited Russia and Washington's agreement to talk about the Syrian issue with Moscow show the decline of Western influence in the Middle East.


"The United States wants to negotiate while Russia hasn't completely changed the balance of power, getting even more favorable results," Verhaeghe said, according to Atlantico.
Ever since the start of its airstrikes against Daesh (Islamic State), Russia openly declared it was willing to work together and coordinate its efforts with the US-led Western anti-terrorist coalition.

Furthermore, regardless of what Western media say, Russia always stressed that its goal isn't to keep Syrian President Bashar al-Assad by any means necessary. What Moscow said was that it won't accept the overthrow of a legitimately elected Syrian leader, but if the people of Syria were to democratically elect another president then Russia would no doubt respect that choice.
Currently, the United States and France no longer regard the departure of al-Assad as a precondition for further dialogue, although both Washington and Paris said the opposite just a few weeks ago. That's the power of Russian diplomacy, Atlantico reported.
Russia could of course recall that it was the United States and France which initially armed Daesh, hoping that al-Assad would be overthrown. Their reckless policy eventually nurtured the beast that grew strong, became uncontrollable and escaped from its cage. But what had happened in the past can't be reversed and now it's time to move on.
Under such circumstances in Syria, it becomes even more obvious that the European Union (EU) is nothing but a US vassal. After Putin wins in the Middle East, the EU voted for the "absurd" extension of anti-Russian sanctions to somehow smooth the feeling of the West's political loss in Syria, Atlantico said.