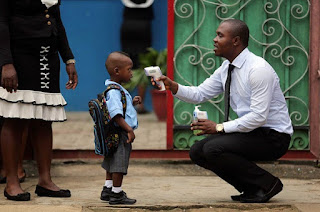 T.A.T - The World Health Organization officially declared Sierra Leone free from Ebola transmissions, marking 42 days, or two incubation periods, without an Ebola diagnosis.
The news prompted nationwide celebrations punctuated with sadness over the ebola-virus-which has killed more than 4,000 people. Celebrants took to the streets in the festive atmosphere in Freetown, while others read aloud names of the dead during a vigil for the hundreds of health care workers who died.


"It's kind of like a mixed emotion," Tunis Yahya, director of communications for the country's National Ebola Response Center, said. "People are happy, but also many are depressed because they lost their families."
The country now enters a 90-day period of enhanced surveillance, a phase considered critical to early detection of new outbreaks.
"The Ebola outbreak has decimated families, the health system, the economy and social structures. All need to recover. It has also left an estimated 4,000 survivors who have ongoing health problems who need medical care and social support," WHO leaders said in a written statement. "WHO will maintain an enhanced staff presence in Sierra Leone during this transition from outbreak control, to enhanced vigilance, to the recovery of essential health services."
The country will now focus on rebuilding its economy, acutely damaged from the sharp drop in tourism and commerce during the yearlong outbreak.