Iran Dictator Khamenei: U.S. and Islamic State Are Working Together 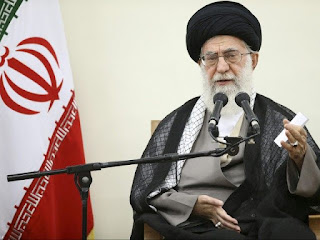 ATP - Ali Khamenei, the dictator of the Islamic Republic of Iran, claimed in a meeting with the President of Nigeria on Monday that the United States is assisting the Islamic State terror group.
Khamenei, whose Shiite theocracy opposes the Sunni Islamic State, said the “Americans and some reactionary governments in the region are directly helping ISIS in Iraq.”
In his meeting with Nigerian President Muhammadu Buhari, the ‘Supreme Leader’ said that Islamic countries should work together to defend Muslims from the west.
“Those international coalitions that claim to be fighting against terrorists are not trustworthy in any way because these destructive forces – particularly America – are the ones that stand behind the scenes of creating and supporting terrorists such as DAESH (ISIS),” Khamenei said.


“According to precise information that we have, the Americans and some reactionary governments in the region are directly helping DAESH in Iraq and they are playing a destructive role,” he added, accusing America of assisting the Islamic terror group.
Khamenei recommended that Muslim countries gang up on America and Israel to block their influence over the Ummah.
“The Islamic Republic has extensive relations with all countries except for America and the Zionist regime. However, we believe that Islamic countries should have closer relations to one another,” said the Iranian dictator.
Khamenei congratulated the Muslim Buhari for being elected President of Nigeria, which was formerly run by a Christian man, Goodluck Jonathan. Having a Muslim leader in Nigeria now allows for “capacities” for further development of relations between the two states, the Islamic Republic theocrat stated.
“Iran is an advanced and large country that has many capacities for further relations and cooperations,” Buhari responded, thanking Khamenei for his praise. “Today and in my meeting with the Leader of the Revolution, I learned many lessons and I am thankful for this meeting and these words of advice,” he added
On Monday, the Ayatollah also met with Russian President Vladimir Putin. Moscow is assisting the Syrian Assad regime alongside Iranian forces, hoping to keep its despotic rulers in charge of the country.
The Kremlin described the meeting between the two leaders as “constructive,” and that the two sides agreed they were against “external attempts to dictate scenarios of political settlement in Syria.”