Putin: Turkey Shooting Down Russian Warplane Is 'Stab In The Back' 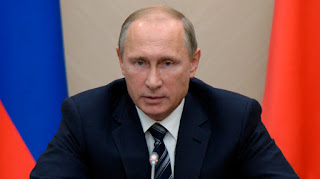 ATP - Russian President Vladimir Putin has called Turkey's decision to down a Russian warplane near the Syria border a "stab in the back."
Speaking at a meeting with Jordanian King Abdullah II, Putin on Tuesday accepted his condolences on the death of a Russian pilot who was reportedly captured and dead.
Putin said the Russian Su-24 jet was shot by a missile from a Turkish jet over Syria about 1 kilometer (just over a half-mile) away from the Turkish border, which he described as a "stab in the back by the terrorists' accomplices."


Putin warned that the incident would have "significant consequences" for its relations with Turkey and criticized Ankara for turning to NATO to discuss the incident instead of first explaining to Russia what happened.