UN Agrees To Combat IS Threat 'By All Means' 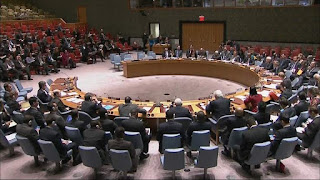 ATP - The world powers also agreed to co-ordinate efforts aimed at preventing further atrocities by IS - but the resolution does not provide any legal basis for military action.
The UN Security Council said IS "constitutes a global and unprecedented threat to international peace and security" and it expressed the determination "to combat by all means this unprecedented threat".

David Cameron says the world has united against Islamic State
The vote comes a week after militants launched co-ordinated gun and bomb attacks in the French capital, killing 130 people.


The continuing global threat posed by extremists was again highlighted after gunmen stormed a luxury hotel in Mali, where at least 21 people have been killed.
The resolution was drafted by the French, co-sponsored by the UK and also gained support from the Russians, whose veto power previously led western nations to put off seeking UN backing.
Following the vote, Prime Minister David Cameron said: "This is an important moment. Today, the world has united against ISIL (IS).
"The international community has come together and has resolved to defeat this evil, which threatens people of every country and every religion.
"The United Nations Security Council has unanimously backed action against this evil death cult in both Syria and Iraq.

"It has also reiterated its determination to secure a political solution to the conflict in Syria."
He added: "Today’s vote shows beyond doubt the breadth of international support for doing more in Syria and for decisive action to eradicate ISIL.
"Britain will continue to support our allies who are fighting ISIL in Syria.
"I will continue to make the case for us to do more and to build support in Parliament for the action that I believe is necessary for Britain to take to protect our own security, as part of a determined international strategy.
"We cannot expect others to shoulder the burdens and the risks of protecting this country."
Although the UN resolution does not invoke the chapter of the UN charter authorising the use of force, Mr Cameron - who insists there is a legal case for military action even without it - will hope it will bolster support at Westminster for his efforts to extend airstrikes into Syria.
But Labour leader Jeremy Corbyn is strongly opposed to such a move and is to give a speech later in which he will blame the Iraq and Afghanistan wars for terror attacks on Britain.
Seven days after the massacre in France, Parisians took to the city's streets in a united show of defiance.
Crowds gathered at the scenes of the attacks and landmarks to hold vigils and mark the exact moment a week on when the terrorists launched their deadly rampage.
Bouquets were laid at the Place de la Republique, lit by the flames of hundreds of candles, and at the cafe La Belle Equipe, where one of the gun attacks took place, mourners broke into a round of applause at a memorial for the victims.
France will be on a state of high alert until well into the new year after the country's senate voted to extend a state of emergency for three months.
The move expands powers to allow police to carry out arrests and searches, while authorities can ban the movement of people and vehicles at specific times and places.

Meanwhile, Belgian authorities have brought terror charges against a third suspect over the attacks, with two others in custody.