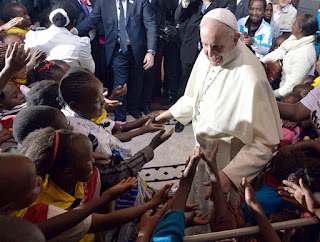 ATP — Pope Francis denounced the conditions slum-dwellers are forced to live in during a visit to one of Nairobi’s many shantytowns Friday, saying that access to safe water is a basic human right and that everyone should have dignified, adequate housing.
Residents of the Kangemi slum lined the mud streets to welcome Francis, standing alongside goats and hens outside the corrugated tin-roofed shacks where the shantytown’s many small businesses operate: beauty parlors, cellphone “top-up” shops and storefront evangelical churches.
Those lucky enough to score access to St. Joseph’s parish erupted in cheers and hymns when Francis arrived at the open-sided church that serves the slum of about 50,000 people.
In remarks to the crowd, Francis insisted that everyone should have access to water, a basic sewage system, garbage collection, electricity as well as schools, hospitals and sport facilities.


“To deny a family water, under any bureaucratic pretext whatsoever, is a great injustice, especially when one profits from this need,” he said.
The pope has frequently insisted on the need for the three “Ls” — land, labor and lodging — and on Friday he focused on lodging as a critical issue facing the world amid rapid urbanization that is helping to upset Earth’s delicate ecological balance.
Kangemi is one of 11 slums dotting Nairobi, East Africa’s largest city, and people here struggle without basic sanitation.
Francis denounced the “injustice of urban exclusion” that has forced some 60 percent of Nairobi’s population to move to slums that cover just 6 percent of the city’s residential land, according to 2014 figures from the U.N. Habitat program.
“These are wounds inflicted by minorities who cling to power and wealth, who selfishly squander while a growing majority is forced to flee to abandoned, filthy and run-down peripheries,” Francis said.
Francis told the residents that people forced to live in slums actually share values that wealthier neighborhoods can learn from: solidarity and looking out for one another. But he said it was unjust that entire families are forced to live in unfit housing, often at exorbitant prices.
He called for a “respectful urban integration” with concrete initiatives to provide good quality housing for all.
His message was welcomed by residents of Kangemi, who said the city only pipes in water three days a week, Tuesday through Thursday, but it’s not safe to drink. Garbage collection goes to only those who can pay for it.
“Some people don’t have toilets in their homes,” said Emily Night, a mother of two who works at the St. Joseph’s HIV counseling program. “Those that do, maybe 50 people are using it!”
Things aren’t much better in nearby Kabiria slum.
“It’s difficult. There is no water. We drink well water,” said Rebecca Nanzala, who attended the pope’s visit with the youngest of her three children, 2-year-old Mary. “Some treat it, some don’t.”
Francis raised the issue of environmental deterioration in cities in his landmark encyclical “Praise Be,” saying many megacities today have simply become health threats, “not only because of pollution caused by toxic emissions but also as a result of urban chaos, poor transportation, and visual pollution and noise.”
“Many cities are huge, inefficient structures, excessively wasteful of energy and water. Neighborhoods, even those recently built, are congested, chaotic and lacking in sufficient green space. We were not meant to be inundated by cement, asphalt, glass and metal, and deprived of physical contact with nature,” he said.
After the visit to Kangemi, Francis received a rock-star welcome at Nairobi’s Kasarani sports stadium, where he zoomed around the track in his open-sided popemobile to the delight of the crowd.
Later Friday, Francis has a private meeting with Kenya’s bishops and then heads to Uganda for the second leg of his trip. There, he’ll honor the country’s Anglican and Catholic martyrs.
On Sunday, he is due to arrive in the Central African Republic, the most dangerous leg of the pilgrimage given the ongoing conflict between Christians and Muslims.
The Vatican spokesman, the Rev. Federico Lombardi, said Thursday night that plans hadn’t changed and that the Bangui leg of the trip was still on.