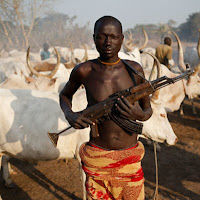 Suspected Fulani herdsmen in an early morning raid have sacked nine predominantly farming communities in Dekina local government area of Kogi East Senatorial District, killing 22.
The herdsmen who raided the communities were said to have carried out the attack in the early hours of Monday, November 9, 2015, killing 22 and wounding scores.
Most of the displaced community members have reportedly taken refuge in neighbouring areas.


Briefing journalists at the National Assembly, representatives of the affected communities led by Barrister Usman Ibrahim and Silas Ahiaba stated that the affected communities are distressed and require the urgent intervention of the state and federal governments.
Ibrahim said: “We are all talking from the position of distress. As we speak, our fathers, grandfathers, parents and loved ones have been chased away from their ancestral homes where they have existed for over 200 years.
“In the early hours of Monday, the communities were greeted with the invasion by heavily armed Fulani herdsmen who killed and maimed so many. As at today, 22 people have been confirmed dead, with several others either injured or missing. Right now, we are refugees in our own land.”
Ibrahim who is a Committee Clerk in the National Assembly said the response from the state government has so far been skeletal.
“The state government has been fully briefed on this matter. But whether they have been able to make any inroad is still not certain because our people are still displaced.
“As at today (Wednesday), a few policemen went to the places but no form of arrest has been made so far. There has not been any fruitful response from government at all levels.
“We want the federal government to intervene and return our families home in one piece. That’s the humble appeal we are making”, he said.
The affected communities are: Agojeju, Ikpoba, Ojeh, Ajomojayi, Ajadaji, Idochi, Ojiyanawo, Ulaja and Oganenigu in Dekina/Bassa federal constituency.