T.A.T - The European Union has relocated 116 migrants more than a month after the start of a plan to distribute 160,000 asylum-seekers throughout the continent.
More than 750,000 migrants have arrived in Greece and Italy by sea in 2015. In late September, the EU approved a controversial two-year plan to relocate 160,000 migrants from Greece and Italy to other EU countries through mandatory quotas.
Most migrants seeking asylum are currently in Greece, Italy and Hungary. The proposed quota plan would relocate the majority of asylum-seekers to Germany, France, Spain, Poland and the Netherlands.
The EU has so far made 1,417 spaces available for migrants in member states and so far has only relocated 116 of them, the European Commission said. EU member countries that refuse to accept relocated migrants face a financial penalty of 0.002 percent of their gross domestic product.

About 52 percent of the estimated more than 750,000 migrants are Syrians, followed by migrants from Afghanistan (19 percent), Iraq (6 percent) and Eritrea (5 percent). About 65 percent of migrants are men, 20 percent are children and 14 percent are women.
Nearly 3,500 have died or disappeared during their journey this year. The escalation of the migrant crisis of people heading to Europe to flee war and poverty can be epitomized in one statistical comparison: about 216,000 migrants arrived by sea in 2014, whereas about 218,000 migrants arrived by sea in just October alone. 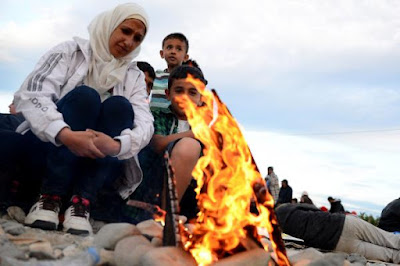 Tove Ernst, a European Commission migration spokeswoman, said it took time to put the mechanisms in place to facilitate relocation.
"The system is now up and running -- the first flight from Greece [has left] and there were already several flights from Italy -- and we're hoping that progress on the ground and progress with member states will be made swiftly," Ernst said.