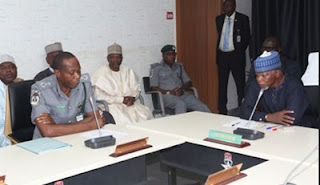 The Comptroller-General of Nigeria Customs Service (NSC), Col. Hameed Ali (rtd), has advocated the death penalty for any customs officer found to have indulged in stealing public fund or any corrupt practices.
Speaking in Kano while addressing officers and men of the service in continuation of his tour of formation under Kano/Jigawa Command on Wednesday, Ali said though the law does not permit such stiff penalty, if he has his way, corrupt officers who steal government money, “should be shot dead.”

According to him
, “Many of us are in the service not because we want to serve but because of what we can make out of it. Anybody who goes contrary to the laws will be showed the way out. There will be no room for indiscipline in the system, you must be disciplined and that is why we are called para-military. If you are not disciplined, forget it because we stand on discipline.

“Henceforth, the laws are very clear. Section 47 is there and we shall apply it without fear or favour which is 10-year jail term and that is the maximum punishment. My prayer is that nobody should give me the room to apply that punishment. We are the gateway of the country and if you are corrupt, that is the reflection and perception you are sending to the outside world about Nigeria.”
The customs boss also warned officers over connivance with smugglers, particularly those manning the borders, pointing out that it was wrong for them to compromise and allow trailers bringing in contraband goods, arms, ammunition and other dangerous items into the country unchecked.
He stated that most of the trailers left unchecked at the borders might be carrying arms and ammunition used by insurgents, kidnappers, cattle rustlers and other criminal elements to disturb the peace of the country.
Ali who also spoke to the officers on the need to uphold discipline, integrity, honesty and transparency, pointed out that gone were the days when the Service was seen as indiscipline and corrupt organisation, adding that: “The administration of President Muhammadu Buhari believes in the mantra of change, and if you don’t change, we will change you.”
The retired military chief also noted that the NCS management team is currently reviewing promotion exercise carried out without due process, adding that those who benefitted from abnormal promotion should be ready to face demotion.
He said within 10 months, the service has generated N747 billion, and urged them to ensure that NCS will be able to generate over N200 billion before the end of the year so as to meet the federal government’s target of N944 billion, “and if we work harder by blocking the leakages, we can meet the N1.2 trillion target set by the Customs management.”