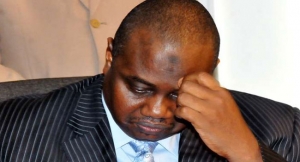 In a two paragraph press release signed by the Special Adviser to the President on Media and Publicity, Mr Femi Adesina, the President explained that Mr Ibrahim Mustapha Magu would replace Lamorde in Acting capacity.

Mr Magu, who is an Assistant Commissioner of Police, was one of the deputies of the former EFCC boss.


Mr Adesina explained that Mr Lamorde was proceeding on terminal leave with immediate effect.
Mr Lamorde was earlier on Monday sighted at the villa for what is believed to be his final meeting with President Muhammadu Buhari as the chairman of the commission.
The former EFCC boss was appointed as acting chairman of the agency in 2011 by the former President, Goodluck Jonathan, and was confirmed as chairman by the Senate in February 2012.
He took over from the then EFCC chairman, Farida Waziri, and prior to that, he served as Director of Operations of the EFCC.